The World is Getting Better!

We often think of the world as getting worse. Some end time scenarios as taught by Biblical teachers require that things must get bad before Jesus comes back. But in fact the world is more Christian now than has ever been in history. I realize some individual countries are worse off, but as a whole the Kingdom of God is growing in the earth. Take a look at these statistics.

In 100 AD there was one practicing Christian for every 360 unbelievers or nominal Christians. In 2010 there was

one practicing Christian for every 7 unbelievers or nominal Christians. Wow!*

The rate of Christian growth is multiplying. It took 1900 years for Christianity to go from 0% to 2.5% of the population. This 2.5% is practicing Christians, not just people who say they are Christian. 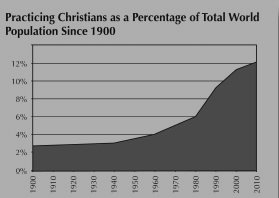 “Christianity is exploding in growt

h across the world, with more than 200,000 people becoming born-again Christians every day. All totaled there are more than a

million people per week becoming Christians. The tiny seed that came into the earth in that little nation of Israel has grown to permeate the earth. With m

ore than two billion people claiming to be Christians today, Christianity is the largest, most influential block of humanity in the world.” **

The world is not only getting more Christian but it is getting better. Look at any study of how life was in 1900 compared to now. It’s amazing. Violence is down, disease is less, and standards of living are higher.

What is happening here?

… the God of heaven will set up a kingdom that will never be destroyed, nor will it be left to another people. It will crush all those kingdoms and bring them to an end, but it will itself endure forever. Daniel 2:44

Be encouraged, that kingdom is being set up now. We are seeing it right before our eyes. I know there are many challenges, but it is an exciting time to live. Open up your spiritual eyes and see what God is doing.